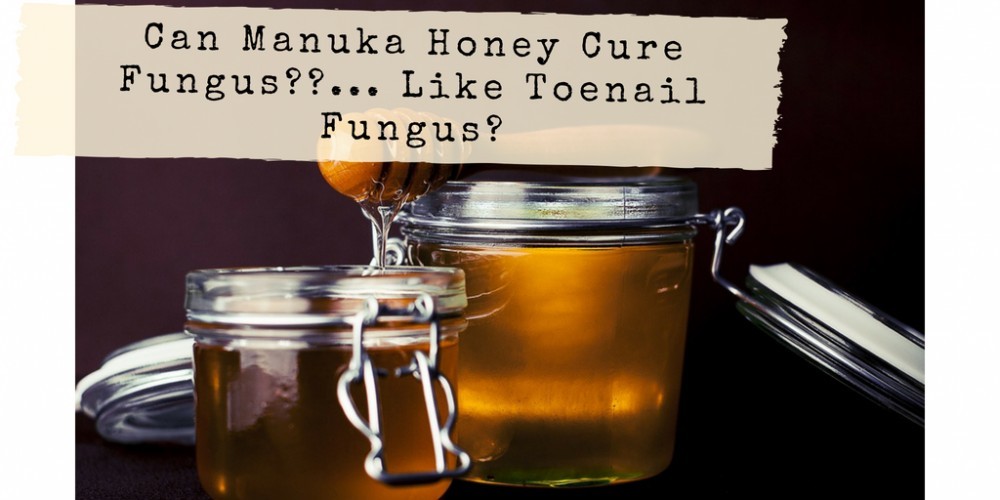 Can manuka honey cure fungus? Could this be the natural treatment that you have been looking for or is this just going to be another product that isn’t going to produce the desired results?

Manuka honey is becoming more and more popular lately and is being used for a variety of different treatments. This is expected with the rising trend of natural health products. But seriously… Can this really care that nasty case of toenail fungus that may be plaguing you this very second?

The answer to this question is… Well… Maybe. Manuka honey can be used as an antifungal, but how good of an antifungal it actually is… That is a different question.

But anyways, before I get into the antifungal properties of this honey, let’s first go over what exactly it is…

What Is Manuka Honey?

Manuka honey is a honey that comes from bees that pollinate the manuka bushes, which are native to New Zealand and Australia. It is more common in New Zealand but also can be found in some parts of Australia as well.

While doing some research on this topic, I found a bunch of misinformation out there. Contrary to much information online, manuka honey has not been used for thousands of years as a natural treatment to all sorts of health conditions. In fact… It wasn’t even around until sometime in the late 1800s when Apis mellifera (European honeybee) was first introduced to New Zealand by a beekeeper named Mary Bumbly.

That said, the manuka bushes themselves have been used by natives of New Zealand for many years, such as by the Maori people. They have been known by the natives to have antibacterial properties (and yes they have antifungal properties as well) and have been used in a number of different ways. There bark…used for burns & skin diseases, Ian their leaves boiled for colds.

Manuka honey is not your typical light golden color honey that you find at your local Walmart or Giant Eagle. It has a dark brown color to it and is very viscous.

* If you are going to buy manuka honey make sure that it is as stated above. I have heard stories about honey being mislabeled as manuka when it really is not. If you buy outside of New Zealand or Australia then you should be good because the honey has to pass testing before being labeled as manuka, as a way to safeguard customers.

Why It Can Fight Off Fungus

Fungal infections, such as toenail fungus, are more common than you may think. The numbers vary a lot depending on what source you are reading, but according to Berkely Wellness, around 10% of Americans have a toenail fungus infection. And obviously this percentage increases if you include all fungal infections. More so… This number tends to increase with age.

So it is pretty common… Don’t think that you are the only one if you do have a nasty infection.

That said, it is important to treat the problem so that things don’t get worse. Usually the worst that happens is just some cosmetic problems, but fungal infections can lead to some other serious health conditions, largely due to how they compromise your immune system.

So is manuka honey the natural care you have been waiting for?

Well… Manuka honey does have antimicrobial activity… Meaning both antiviral activity and antifungal activity. This is thought of to be mostly due to how the honey produces hydrogen peroxide, or H2O2, from glucose and oxygen. This production happens with the help of the glucose oxidase enzyme.

Hydrogen peroxide is of course well known for antimicrobial activity. It kills off bacteria and fungus is by destroying their cell walls, and pretty much trust kill off anything in its path… including skin cells or whatever you put it on (if you apply hydrogen peroxide for skin conditions).

It is also suggested that there are some phytochemicals contained that additionally have antimicrobial properties.

Any Real Proof That It Works?

There our a fair amount of studies on the antibacterial activity of manuka honey, but not nearly as much when it comes to antifungal treatments. However, there are some.

One good study that I found tested the antifungal ability of manuka honey on three different candida species, including candida albicans, candida glabrata, and it candida dubliniensis. In this study there were four different honeys tested against these fungi. The honey with the most significant ability to fight off the different fungi (all three) was that which showed the greatest hydrogen peroxide concentrations.

The study was done using amounts of money that could be realistically applied in a clinical setting… Not those ridiculous studies that you hear about using some insane amount of treatment that could never be applied in real life.

So yes… Manuka honey does have some promise when it comes to fighting off fungus. However, there are some downsides.

If you’re going to use manuka honey you are going to want to apply it topically. While it can be ingested, and it taste darn good, it is unknown if taking it orally would produce any positive results in your battle against fungus.

The downside to taking it topically is of course that is very sticky, and… The human body produces catalase which could reduce hydrogen peroxide activity. So basically what I am saying here is that it might not work as well as it has shown to work in a lab setting.

Is It Worth Trying?

While manuka honey does show some promise, it does not appear to be anything that is going to be working miracles when it comes to treating fungal infections. You could call a very mild treatment and it could be somewhat effective for fungal infections that are very minor, but other than that its effectiveness is questionable.

The bottom line is that there needs to be more research done and more experiments performed.

But is it worth trying? Well, that is up to you. If you have a fungal infection that isn’t all that serious then you may want to give it a shot. After all… Even if it does not work you can still use the honey as a sweetener. So it’s not like it is going to go to waste.

For more serious fungal infections, or for people who are looking for a proven treatment right away, I suggest taking a look at Emuaid MAX. This is a topical antifungal cream that I highly recommend. It is proven to be very effective and doesn’t have any side effects.

I hope you liked this article and found it helpful. Please share to help spread the word! And if you have any questions or comments, leave them below and I’ll get back to you as soon as I can 🙂