Is Red Tea Detox a Scam? – Pretty Much… You Decide

Red Tea Detox by Liz Swann Miller is claimed to be the “single best method for loosing pounds quickly and easily”… But is it really? Is often promoted as a way to lose 14 pounds in 14 days… But is this really the miracle that people are saying it is?

Or is it possible that Red Tea Detox is a scam you should be avoiding at all costs? I know a lot of people are asking this question, which is the reason I am writing this review. After digging around and doing research into this program, I can tell you there are definitely some things that you are going to want to hear. Much of what you were told was probably a lie, and/or misleading.

While this red tea recipe does have the potential to aid in weight loss, and you definitely could lose some pounds while following along, it is not the miracle recipe that it is claimed to be.

Since you are wondering if this is a scam I’m guessing you came across one of the video presentations, which are quite ridiculous. There are several of them out there it seems, but I will be basing my review on the one I came across, which was found on RedTeaDetox.com, which is the official website.

The video presentation starts off with Liz Swann Miller telling some crazy story about being in Africa and some red venomous snake staring at her, rattling its tail. She says that she then passed out and woke up surrounded by an African tribe, with the shaman giving her some cup of tea that changed her life forever.

Apparently Liz went through a difficult pregnancy and A lot of excess weight. During this trip to Africa this tea she discovered was supposedly the secret to fat loss, allowing her to lose 41 pounds in a matter of weeks.

But of course this is mostly a “secret” and she claims to be the first person to bring this to America, which is a complete lie as you will see soon.

Much of the video presentation is very misleading and I am hesitant to believe any of the story of her going to Africa. It is likely completely made up and false.

It it is no wonder you are asking yourself if this is a scam. The information given is absolutely filled with red flags, some of which I will go over below…

#1 – This Lady Needs a Geography Lesson

Liz really needs to take a class and geography. Above her video presentation she claims that this recipe is some “secret West African red tea”, but then in the video talks about the tribe drinking this tea being from Kenya… Which is in East Africa… On the entire other side of the continent. So which is it? East or West Africa?… 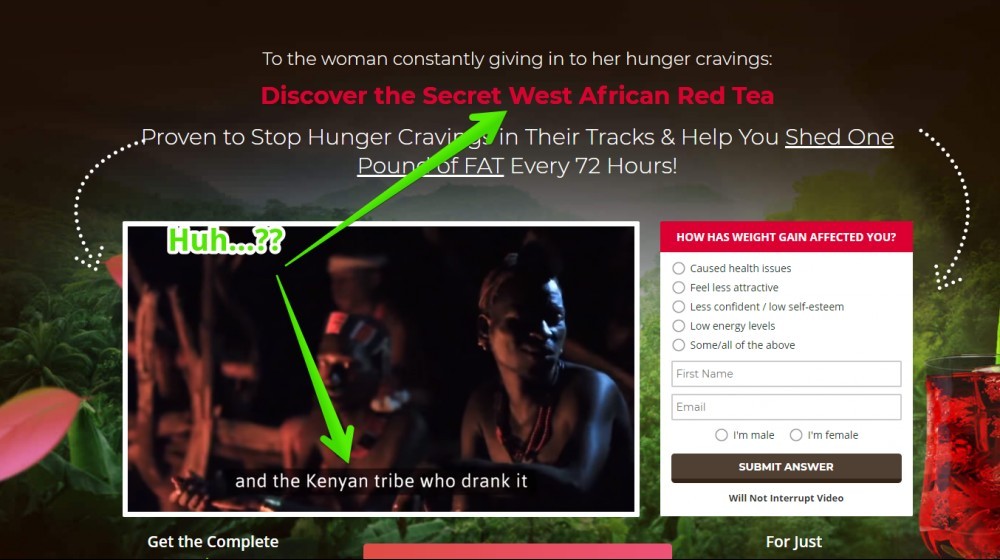 When she supposedly encountered this venomous snake, she mentions that it rattled its tail. This leads me to believe that she is talking about a rattlesnake, which based on the research I have done are only found in southern Africa. So which is it? South, West, or East Africa? Africa is a big continent and this makes a huge difference.

#2 – Did She Really Lose All This Weight?

You may have also noticed that the before and after photo of Liz seem to be a bit suspicious. The face is very similar, the hair can easily be changed, but the skin tone is noticeably different between the two photos. It is also hard to tell, but in the after picture her cheekbones appear to be more pronounced. But again… It is hard to tell since in the one picture she is smiling and in the other she is not.

I’ll also add in that in the before picture, the face seems to be a bit strange… It just doesn’t look natural. But anyways… You decide. 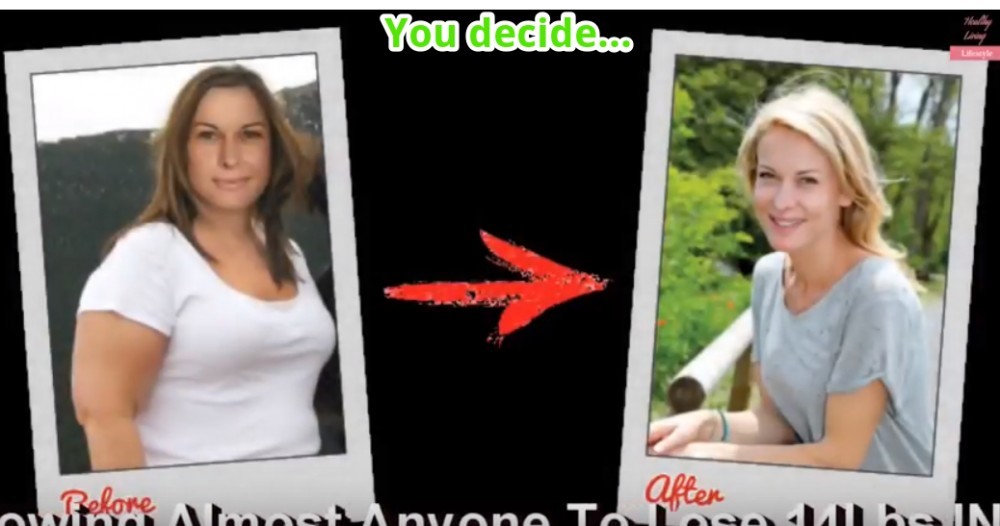 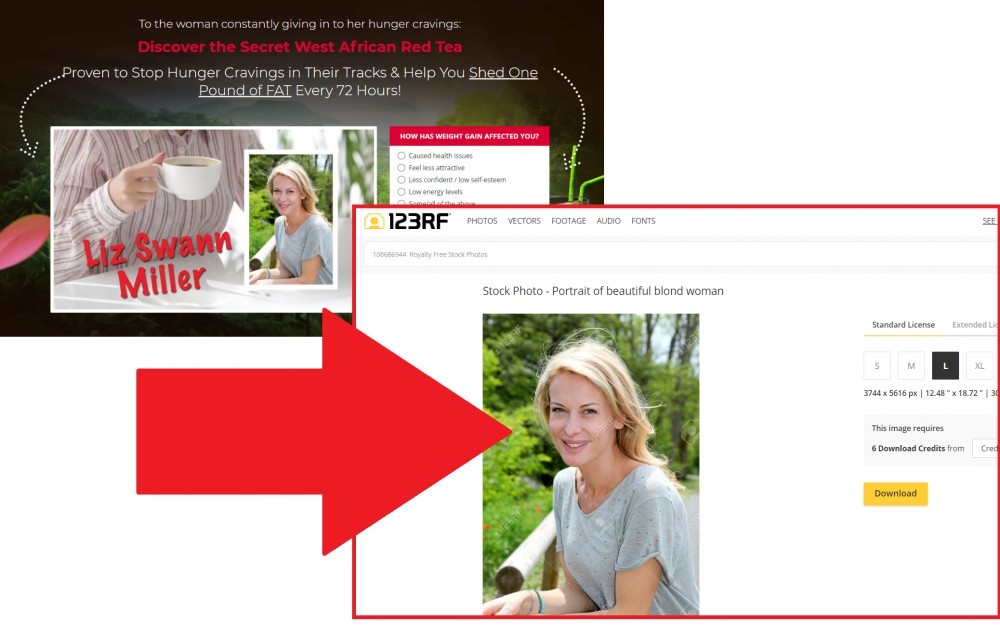 Another red flag is that the numbers just don’t add up. This Red Tea Detox it is often promoted as a way to lose 14 pounds in 14 days, but above the video it states that you can “shed 1 pound of fat every 72 hours”, which would mean that you would lose 1 pound every three days. So which is it?

I have come across sales pages like this plenty of times before. They usually start out with some crazy life-threatening story, and then the author traveling to some remote part of the world to discover some “ancient secret”.

And I’m not kidding when I say I’ve come across this sort of sales pitch plenty of times before. Blood Pressure Protocol, Vedda Blood Sugar Remedy, The Medicine Man Hearing Remedy… these are all products I have reviewed in the past that have been based around some remote and ancient secret.

And then of course there are a lot of other ridiculous parts of the sales pitch. Overall, the entire thing just sounds like a fairytale. Can you really trust any of it? This is the big question.

It seems like your typical over-hyped product that simply is not going to be nearly as good as you are told.

Does This Red Tea Recipe Really Work? – A Scientific Look at It

In the presentation you are told that this red tea is made up of five miracle ingredients, however only Aspalathin is actually named. The other four ingredients she doesn’t actually call by name, so I don’t know what they are.

When it comes to aspalathin what you are told is the truth when it comes to its health benefits, however this is not any secret. There’s plenty of information you can find online about making tea from rooibos, which is a plant found in South Africa that contains aspalathin.

Aspalathin has been shown to have a number of benefits, including reducing stress, powerful antioxidant activity, and it can potentially reduce triggers of hunger.

There it is definitely more research that needs to be done, but this study shows that Aspalathin likely reduces stress by hindering the production of cortisol, a stress hormone.

When it comes two reducing hunger, this is due to its ability to help regulate glucose metabolism. But again… There’s a lot more research that needs to be done here and little information on it.

Other studies, such as this one, show it to be a powerful antioxidant by lowering the production of stress-related metabolites, preventing lipid peroxidation, and regulating glutathione metabolism (an antioxidant produced by the body).

I really want to stress that this is definitely not a secret. As I mentioned, there’s plenty of information regarding making African tea from rooibos online. Liz claims to be the first person to bring this information to America but this is just a bunch of BS.

You can actually buy rooibos tea at grocery stores all over the US, such as Walmart for example. Is Walmart a secret? Definitely not.

Now of course there are the other four ingredients that are included in this “secret” to you, that I do not know of. However, based on what I see so far, I highly doubt they are a “secret”.

What Other People Are Saying About It?

Something that I always like to do when reviewing looks like this is to look at customer reviews, if I can find any. It is always a good idea to get information from people who have bought the product and tried it out for themselves. However… When digging around I really didn’t find many reviews of much value.

I found lots of good reviews, however they don’t seem to be honest. For example, on TrustPilot, the independent review site, there are tons of good reviews but they are also filled with affiliate links to go purchase the ebook. Can you really trust them? Probably not… 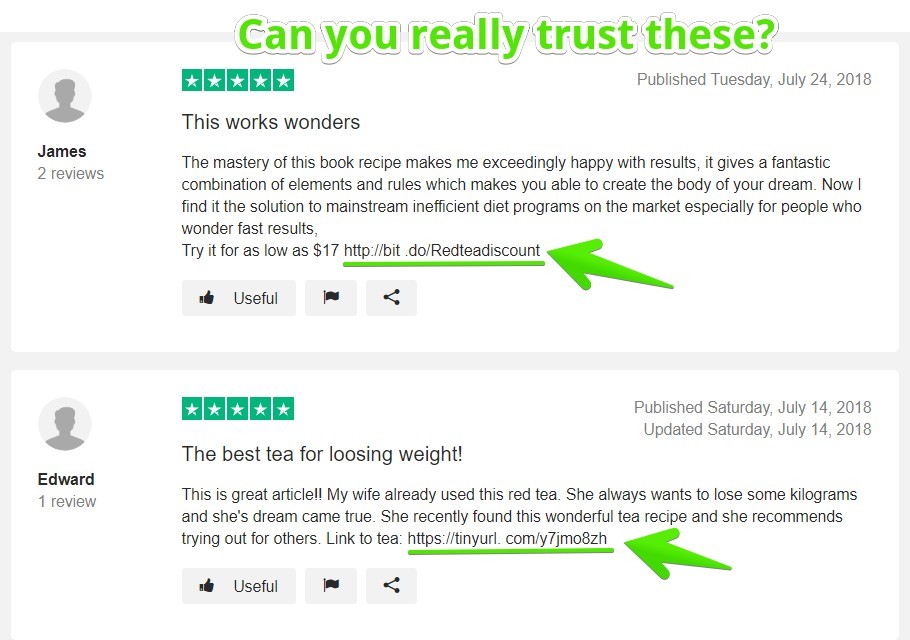 While there is definitely a lot of very “scammy” activity going on when it comes to the marketing of this Red Tea Detox by Liz Swann Miller, I am not going to call it a scam. But you can form your own opinion on this, depending on what your definition of a scam is.

The reason I am not calling it a scam is because this Red Tea Detox recipe does have the potential to aid in weight loss… Which is the whole point. It may not be nearly as good as you are led to believe, but it can potentially work.

That said, I would definitely not purchase this Red Tea Detox product. I would search online for rooibos teas, or just go to your grocery store and see if they have any. I mean… What you really want to purchase a product like this?… One that is marketed in such a way that is almost dehumanizing? I sure wouldn’t.

But anyways… It is your money and you can do with it what you want. I hope you enjoyed this review and found it helpful. Please share it to help spread the truth. Also, leave any comments or questions down below and I’ll get back to you as soon as I can 🙂